Lately I have had a weird problem... My primary computer system will be fast and responsive, like it should be, but randomly it would suddenly slow to a crawl. After opening the Task Manager, I found that my CPU usage was at 100%. That should not be possibly with my system so I knew something was wrong. I was pretty sure it wan't anything system- or driver-related, so I started investigating. In the Task Manager, the Processes tab showed no process that had any CPU usage - as if another process was using 100% of all the CPU resources. Even when I clicked "Show processes from all users," nothing was appearing. After a lot of frustration, I just let it sit there... lo and behold, a process showed up that was using 99% of the CPU! It was called "CaptureLibService.exe" and it was loaded by the SYSTEM. 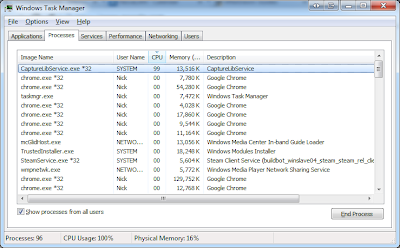 I researched the process and found that it is installed with the software Freemake Video Downloader. The service is installed and used by Freemake to scan network traffic for embedded videos. This is a very fast method to download those pesky embedded videos, but when the service acts up and consumes all the resources, it isn't worth it.

If you would like to prevent this service from starting up automatically, but you want to keep the software, do the following:

3) Look for "FreemakeVideoCapture" and uncheck the box to the left

This will prevent it from starting automatically.
written by Nick Johnson at 02:00

Finally someone else with the same problem! It seems remarkably absent on the internet at large.

Thank you. Indeed this is probably the only article on the entire world wide web that addresses this annoying problem precisely and concisely.

Those Freemake guys should really fire a software engineer right there.

Thanks a lot for this helpful info!

Thank you! I believe this file was not only causing huge cpu usage, but it also was causing dvd shrink to slow to a crawl. I disabled and ultimately deleted this via the msconfig action and then deleting the folder from program files. Note: a previous uninstall of Freemake could not erase a program folder called "Freemake" which contained the CaptureLib file. It would not uninstall, and the error message would state that the program was "running." Once deleted and all traces of Freemake were removed, dvd shrink went from useless to golden! I think the capturelib went nuts and ran constantly, and that this somehow affected the transcoding efforts of dvd shrink 3.2. It also affected other video capture/editing problems that had previously run correctly. All now run properly. I run Windows 7 Professional and had never had any problems with dvd shrink 3.2 until I installed Freemake Video Downloader - I believe the capturelib file came via that program rather than the freemake video converter. Either way, delete it if you find it, and avoid Freemake.

Had exact same problems. Thank you for the easy fix!

I like Freemake...but I disable CaptureLibService.exe every time I update the software.


Thank you so much for sharing this post, I appreciate your work....Freemake Video Converter